One of the most popular Blue Mountains attractions is undoubtedly the Three Sisters at Echo Point. This unique rock formation attracts visitors from all over the world every year.

Very few people can remain immune to the unparalleled beauty of the 3 sisters and the surrounding Blue Mountains. 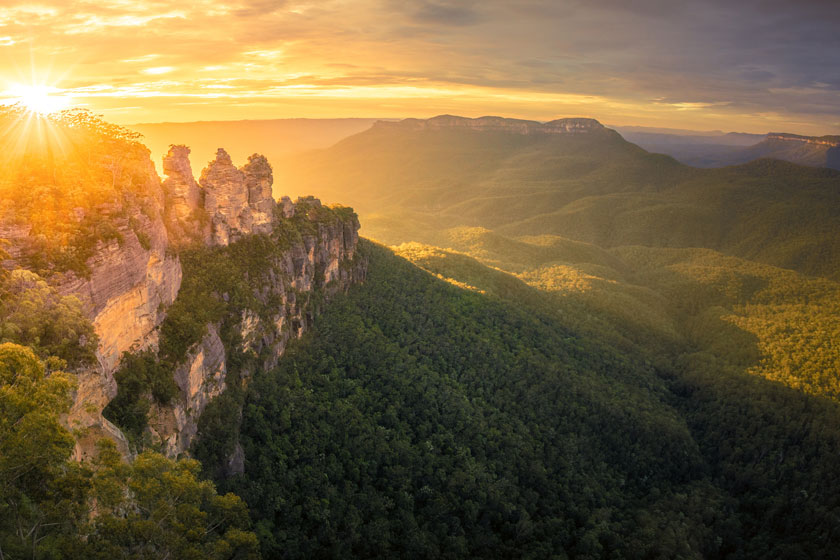 Brimming with a variety of scenic attractions, the Blue Mountains area was actually spectacular enough to warrant a World Heritage badge.

Boasting weathered peaks and cliffs that were formed thousands of years ago, this area is also reputed for its teeming wildlife and exceptional views.

Some of the region’s sandstone peaks have an altitude of more than 900m high above sea level.

How were The Three Sisters formed?

The three sisters were formed when the Blue Mountains were covered by an ocean, which carried large amounts of sediment that gradually sunk to the floor that gradually created rock beds and shales.

Around 200 million years ago, volcanoes erupted through the sandstone and shale layers, forming the ridges and the natural beauty of the Three Sisters that we see today.

We might never know how true the aboriginal legend is, but there’s no denying the spectacular views that visitors are treated to when they visit this picturesque Blue Mountains attraction. 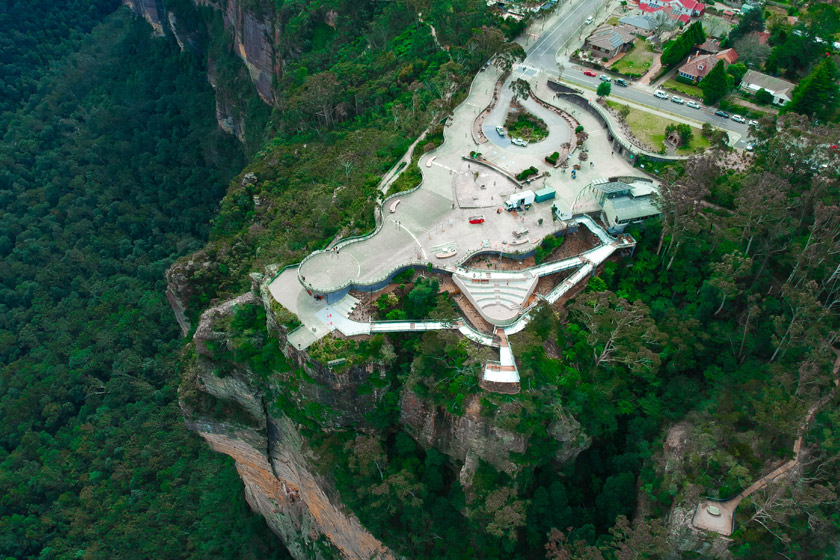 Located near Katoomba, around 2.5 kilometres from the Great Western Highway, this iconic visitor attraction is a popular day trip from Sydney and is experienced by millions of people each year.

Indeed, not far from the Three Sisters is the Echo Point viewpoint. The vantage points at this lookout spot provide you with stunning views on the three rock formations – Meehni, Wimlah and Gunnedoo. 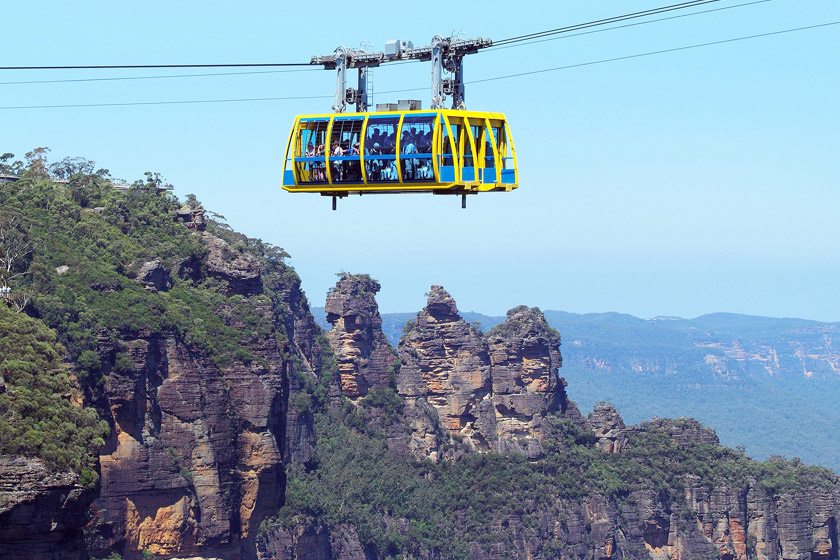 Depending on what time you visit the lookout, you will be able to see the Three Sisters rock formation gradually change colors as the sunlight moves over them, basking this heritage-listed attraction in glorious bursts of colors.

It should still be noted that the Echo Point viewpoint is fully wheelchair accessible.

At different times of year and under different weather conditions, the ridges and sharp shapes of the Three Sisters take on different personalities.

The Three Sisters are also illuminated by floodlights until around 11 p.m. every night, making for a stunning sight against the black background of the night sky.

Where to stay near The Three Sisters?

Katoomba is one of the most convenient places to visit and stay in Blue Mountains because of it’s close proximity to so many points of interest such as Echo Point, Katoomba, the Three Sisters and Scenic World.

There’s a broad range of accommodation at Echo Point, ranging from 3 star bed and breakfasts and backpacker hostels to 5 star luxury accommodation. All camping in NSW national parks now requires a booking. 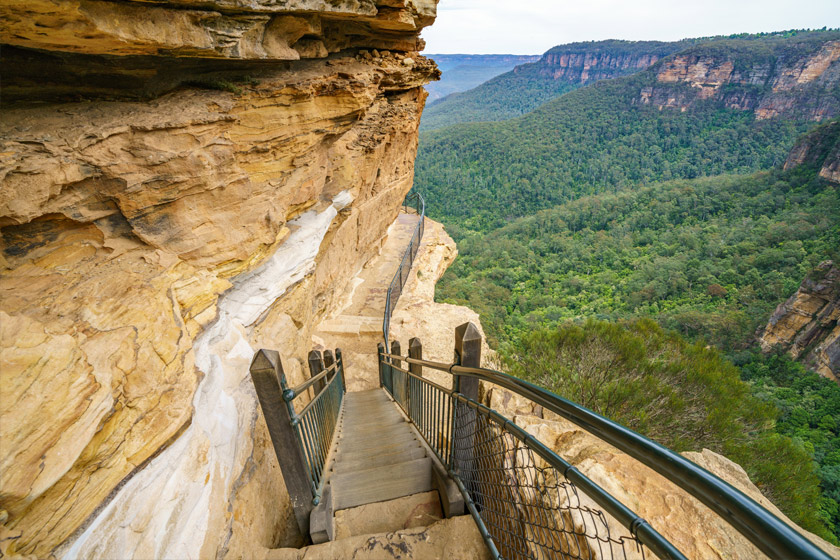 If you don’t want to walk all the way back, you can take the Scenic Railway that will take you to the plateau and scenic world. There are also other adrenaline inducing activities, like the cable car, where you traverse the valley below, with incredible views of the blue mountains, sisters, and the rock beds sandstones below. 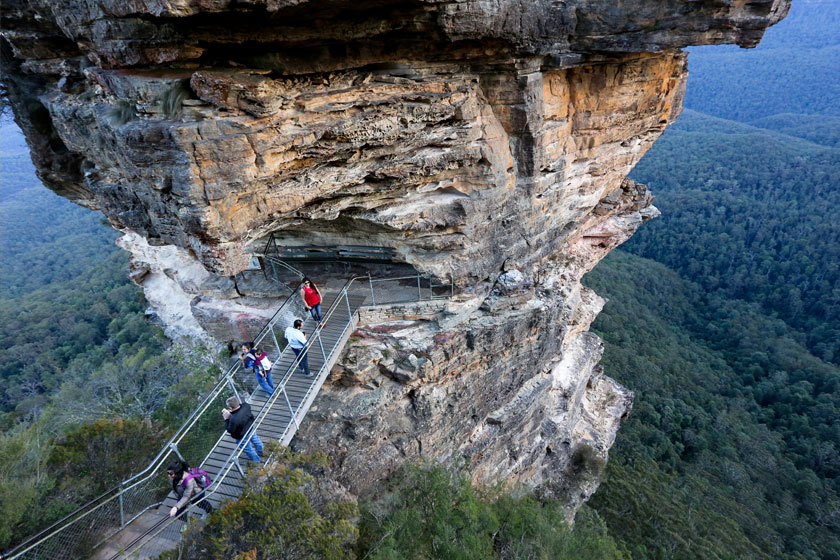 In fact, it’s worth booking a trip on the Scenic Railway to enjoy a bird’s eye view of the Three Sisters and other neighboring Blue Mountains attractions. The railway takes guests who visit the Blue Mountains, down into the valley below, where they can access the three sisters and Katoomba Falls.

According to an old legend, and the tribal law of the local aboriginal people, there used to be three sisters named Meehni, Wimlah and Gunnedoo who were part of a Nepean tribe who lived in the Jamison valley.

The three beautiful young ladies were madly in love with three brothers, but because they belonged to a rival Katoomba tribe, they could not get married.

Ignoring the tribal laws of the two tribes, the three brothers decided to try and capture Meehni, Wimlah and Gunnedoo, causing an unparalleled war between their tribes. And as legend has it, a major tribal battle broke out in the Blue Mountains.

To protect the three daughters from the brothers, the tribe took the sisters to a witch doctor who would temporarily turn the daughters safely into stone and hide them near the rocky wall until the war was over.

Unfortunately, the witch doctor was killed before he could reverse the spell, leaving the three sisters forever encased in stone.

10 Facts About The Three Sisters