Just over a hour from Katoomba are the spectacular Jenolan Caves with dazzling formations and pure underground rivers. These are limestone caves that occupy more than three kilometers of the Jenolan Karst Conservation Reserve, located in the western region of the Blue Mountains.

Scientists estimate that the cave system is 340 million years old. If the estimate is correct, these limestone caves in the Blue Mountains could be the world’s oldest caves. 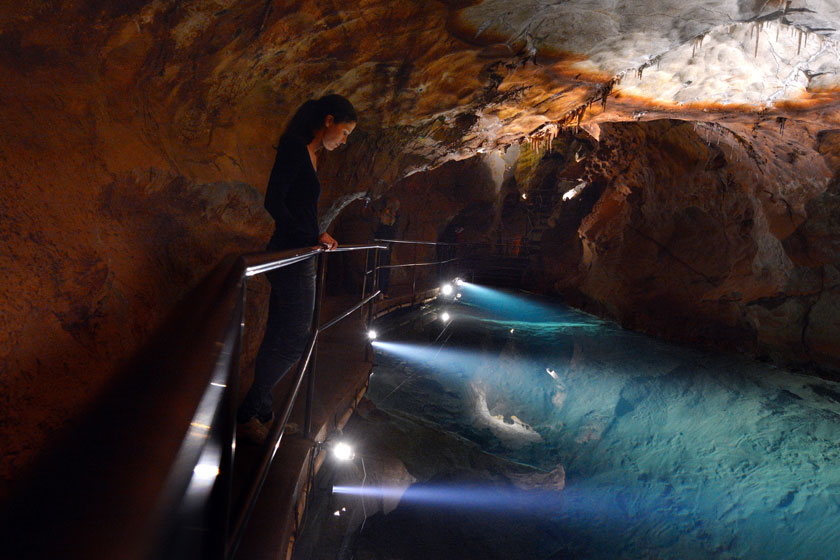 Australia has many limestone caves located in different parts of the country. However, Jenolan Caves attract the highest number of tourists because of their beautiful features, pure underground rivers, spectacular show caves and adventurous activities.

The cave network has more than 400 caves with more than 300 entrances. Jenolan Caves are among the protected areas in Australian with scientific and historic significance. Tourists and scientists began exploring caves in the Jenolan Karst Conservation Reserve in the 19th century. The caves have been a leading tourist destination since that time. Many people who visit NSW, often visit the Blue Mountains and the caves, especially during the NSW school holidays.

Although the caves network has many caves and entrance, only eleven show caves are open to the public for a cave tour. Other caves in this national park are undeveloped caves that are too dangerous to explore. However, visitors need a guide and experience to explore some of the open caves.

The caves in the Blue Mountains that visitors can explore include the River, Imperial (and Diamond Branch), Ribbon, Temple of Baal, The Grand Arch, and Jubilees caves. Other caverns in the network include Jersey, Arch, Chifley Cave, Orient Cave, Pool of Cerberus, Nettle, Elder, and Alladin caves.

Visitors to the caves in the Blue Mountains can explore the caverns at thier own pace during the day, evening tours or at night (if you have an overnight stay).

However, night cave tours are unavailable on Sundays. Some caves are easier to explore and navigate than others. Challenge seekers can explore less strenuous caverns without local guides.

What To Do At Jenolan Caves?

Some of the features that tourists can view at Jenolan Caves in the Blue Mountains include crystal formations, underground rivers, and caves.

Best things to do at Jenolan Caves

Visitors can test their fitness levels by exploring strenuous caves such as the Imperial cave. In addition to ghost and guided tours, tourists can enjoy bushwalks and adventure caving. Tour companies offer kids’ tours during holidays for recreation and educational purposes. 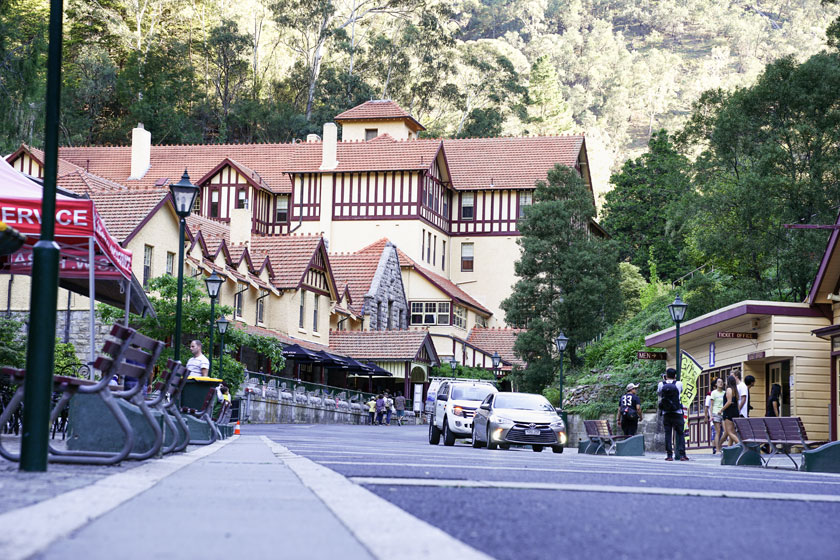 The caves in the Blue Mountains provide an adventurous holiday for the whole family and are a popular attraction during the NSW school holidays. Many visitors choose an overnight stay, to see even more.

Outside the caves, tourists enjoy a beautiful view of the Blue Lake, Carlotta’s arch, and the Jenolan River. The caves are located near the National Park. Visitors can do a little bird watching, have a look at the native wildlife like the brush tailed rock wallaby, and examine plant cover while visiting the caves in the Blue Mountains.

Other adventurous activities near the cave system include bushwalks in the national parks, which are free to locals and tourists.

Visitors can also enjoy live performances, underground concerts and acoustics in the enclosed spaces of Cathedral Chambers in the Lucas Cave.

Are there glow worms in Jenolan Caves?

Near the cave is a picturesque watering hole known as the Blue Lake, and it boasts incredibly smooth waters.

The man-made lake sits below the impressive Grand Arch and was originally created in 1908 to help generate electricity. This lake is fed by the River Styx and the Jenolan River where the scenery surrounding the lake is beautiful. 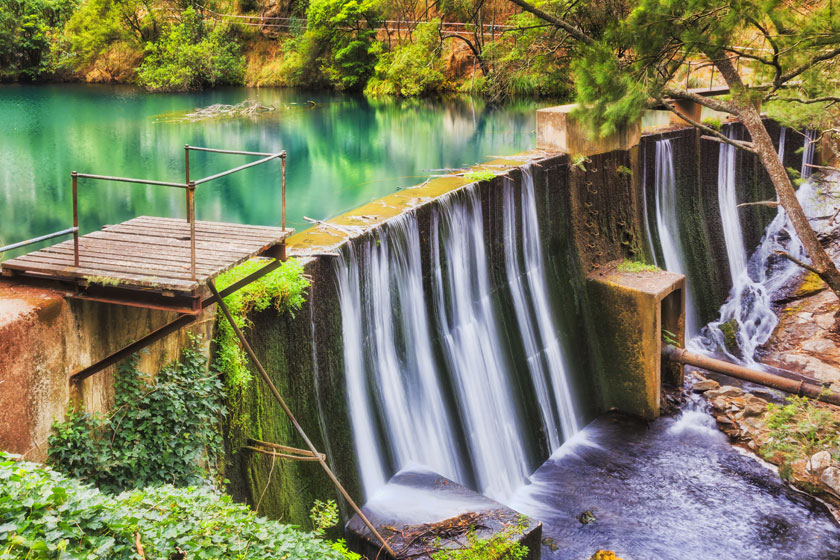 Where is Jenolan Caves?

The Jenolan Karst Conservation Reserve in New South Wales is about 30km south west from Katoomba, however, the drive from Katoomba is about 75km taking just over an hour. And if Jenolan Caves Road is closed, the drive is around 98km and takes around 1.5 hours from Katoomba. But while you might come for the cave at Jenolan, you can also enjoy the scenic country drive.

How to get to Jenolan Caves

Jenolan Caves in the Blue Mountains are located about 175 kilometers from Sydney and 30 kilometers from Katoomba town center (but its more like 75km driving the winding roads). Visitors can drive through the M4 motorway from Sydney through the Blue Mountains to the caves. Many tour services in Sydney offer direct trips and guides to the caves network.

The number of people that can traverse a cave at a time varies depending on the features in them. Some of them can only take a maximum of 8 people per trip.

Visitors are advised to book their trips to the Jenolan Karst Conservation Reserve early to inspect as many caverns as they can in a day. And with prior notice, there is even limited wheelchair access.

Is Jenolan Caves free entry? The Grand Arch may be walked through for free, however the intriguing caverns need cave tour tickets, that cost $42 for adults. Each tour or package has a different price.

At Jenolan, you may take a self-guided cave tour of the extensive cave system. The Devil’s Coach House Cave and Nettle Cave are two of the caves it visits. 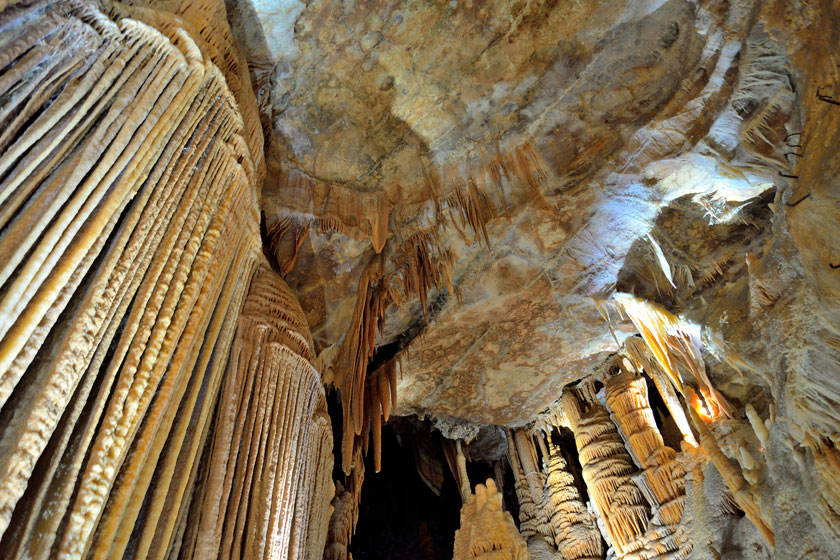 For the first time in 74 years, the operators reopened Nettle Cave and presented a new digital audio tour for guests to explore on their own.

Using Acoustiguide’s digital handset, visitors may navigate the Nettle Cave and the nearby Devils Coach House on a route. In addition to providing information on geological and historical factors, the gadget allows visitors to explore at their own leisure and in as much depth as they like.

Stalactites and stalagmites abound in the Nettle Cave, which is also home to Sooty Owls. By studying prey bones, scientists have learned a great deal about the evolution of life on Earth over many thousands of years.

Stromatolites only develop in this cave, and it’s one of the few places in the world where they can be found.

Early adventure caving visitors to award winning Jenolan Caves saw the stromatolites and referred to them as “craybacks” because of their shape, and they are among the oldest forms of life on the planet, created by cyanobacteria and crystal layers.

The Devil’s Coach House is a mountaintop cavern called after a spooky sighting of the devil riding a horse-drawn coach reported by a camper just outside the cave. The awe inspiring arch roof rises to a height of 57 metres.

These two caves have been equipped for self-guided audio tours with a network of paths, boardwalks, and railings that are meant to minimise the underground environment and safeguard it.

Relics from previous tours of the Nettle Cave, including ancient ladders and early electric lights, have been kept for historical curiosity. Before 1932, visitors could take a tour of the cave, but it was shut down to make way for newly found caverns. 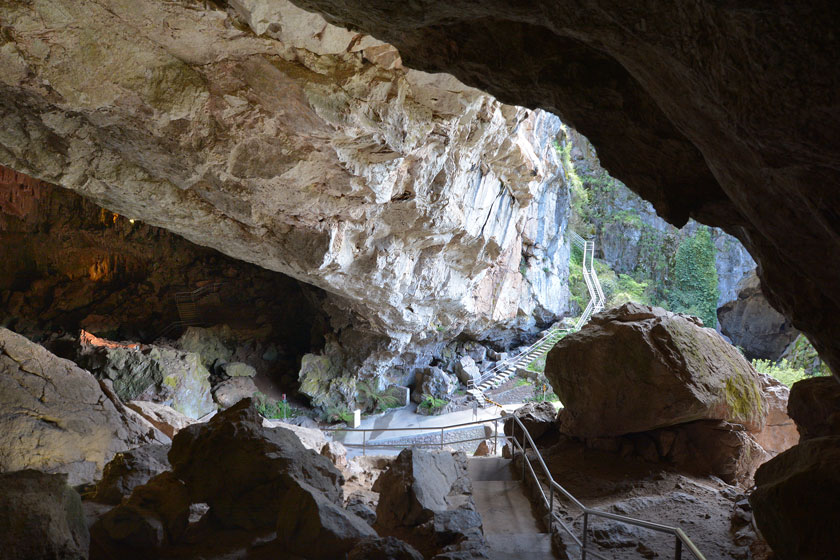 Getting access, on the other hand, comes with certain caveats. To coincide with the inauguration of Nettle Cave, the NSW National Parks and Jenolan launched a new entrance fee scheme.

In order to take the self-guided tour for free, visitors must purchase a Jenolan Pass that gives them access to another cave tour, a souvenir guide, as well as a 12-month discount on other cave excursions at Jenolan Karst Conservation Reserve.

There are also other guided tours, such as the night-time Legends, Mystery and Ghosts Tour and the Adventure Caving Tour. Contact the tour operator for further information.

When are the caves open?

After spending the day exploring this amazing underground world, treat yourself to dinner and overnight stay in the local atmospheric hotel – Jenolan Caves House. 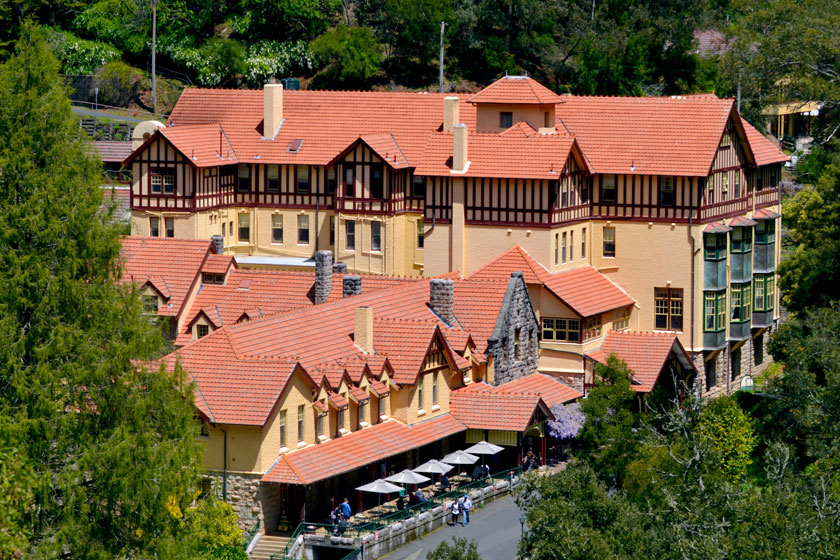 The popular Jenolan caves house is an ideal base to experience the mountains, caves and broader Oberon area.

Caves House is a grand historic guesthouse and just a short walk from the entrance to this underground world, and all the highlights of the Jenolan Karst Conservation Reserve are easily accessible.

Jenolan Caves House features the kind of country hospitality that you would expect, along with grand dining, modern mountain lodge rooms and log fires. Relax at Jeremiah’s Bar and dine at award-winning Chisolms Restaurant upstairs. There’s also al fresco dining throughout the day in the bistro downstairs. 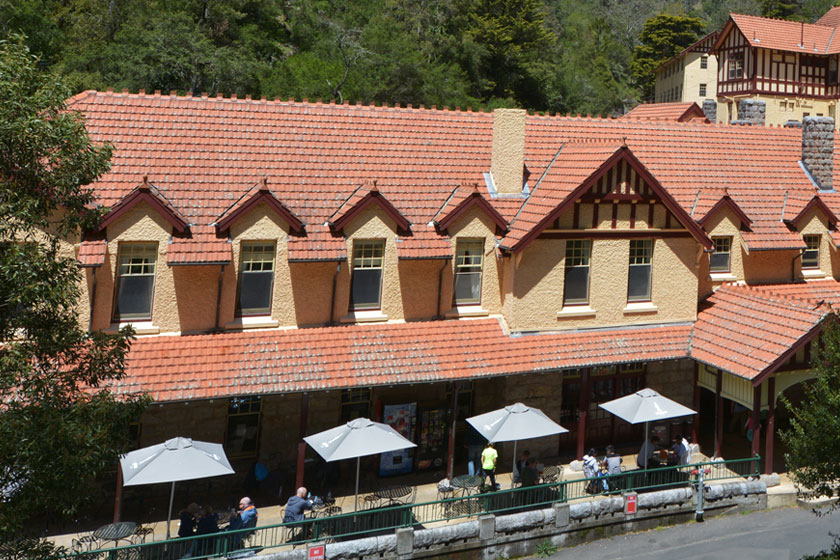