One of the most popular Blue Mountain attraction is undoubtedly the Three Sisters. Indeed, this unique rock formation attracts visitors from all over the world every year. 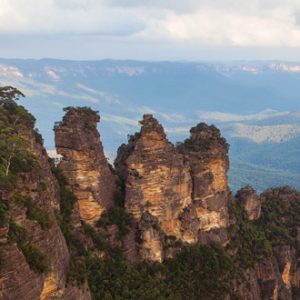 Very few people can remain immune to the unparalleled beauty of the Blue Mountains. Brimming with a variety of scenic attractions, the Blue Mountains area is actually spectacular enough to warrant a World Heritage badge.

Boasting weathered peaks and cliffs that were formed more than a thousand years ago, this area is also reputed for its teeming wildlife and exceptional views. Some of the region’s sandstone peaks have an altitude of more than 900m high above sea level.

According to an old aboriginal legend, there used to be three sisters named Gunnedoo, Wimlah and Meehni who lived in the Jamison valley. The three ladies were madly in love with three brothers, but because they belonged to a rival tribe, they could not get married. Ignoring tribal laws, the three brothers decided to capture the sisters, causing an unparalleled war between their tribes.

To protect them, they took the sisters to a witch doctor who would temporarily turn the ladies into stone until the war was over. Unfortunately, the witch doctor was killed before he could reverse the spell, leaving the three sisters forever encased in stone.

We might never know how true the aboriginal legend is, but there’s no denying the spectacular views that visitors are treated to when they visit this picturesque Blue Mountains attraction. Indeed, not far from the Three Sisters is the Echo Point viewpoint. This lookout spot provides you with a perfect view on the three rock formations.

Depending on what time you visit the lookout, you will be able to see the Three Sisters rock formation gradually change colors as the sunlight moves over them, basking this heritage-listed attraction in glorious bursts of colors. It should still be noted that the Echo Point viewpoint is fully wheelchair accessible.

If you don’t want to walk all the way back, you can take the Scenic Railway that will take you to the plateau. In fact, it’s worth booking a trip on the Scenic Railway to enjoy a bird’s eye view of the Three Sisters and other neighboring Blue Mountains attractions.